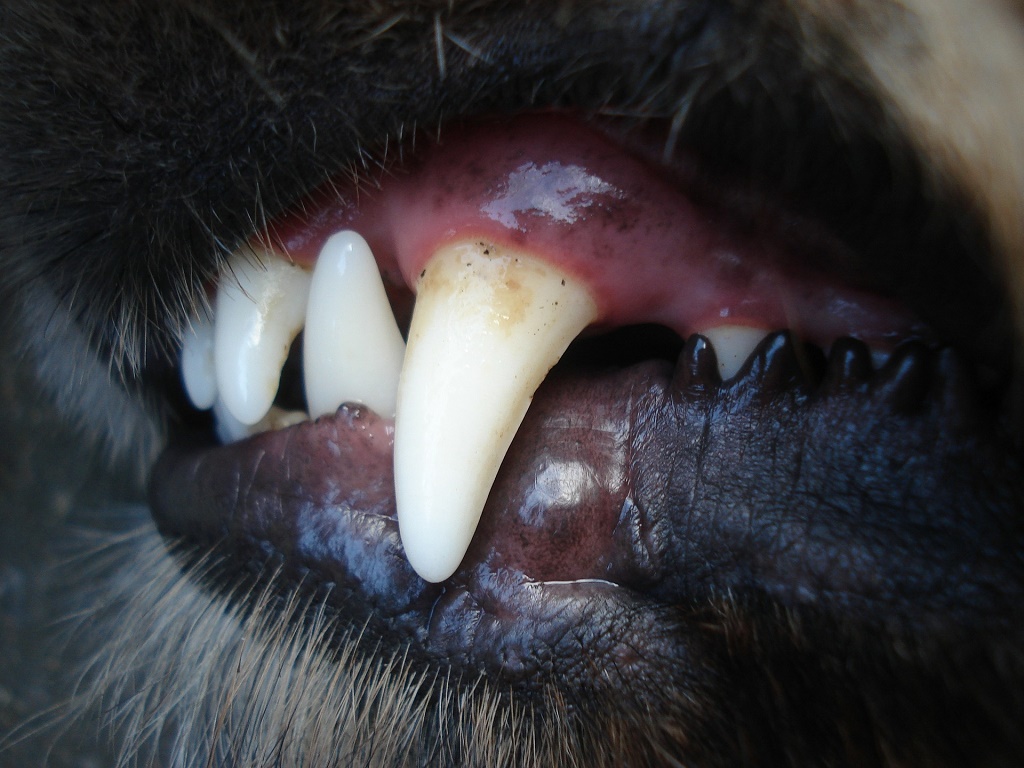 Foul doggy breath and missing teeth are obvious signs of poor oral health in our canine friends. While periodontal disease in animals is not a new problem, it is the most common disease in dogs and cats, but there are some simple methods for keeping our dog’s mouths healthy.

The key factor in the development of periodontal disease is plaque.

When a clean tooth is exposed to saliva, a glycoprotein called pellicle forms on the tooth surface. Plaque forming bacteria adheres to the pellicle and proliferates. Within 24 hours, plaque has formed on the tooth surface, except where it was removed by natural abrasion. Plaque can only be removed via mechanical means such as diet, brushing, dental instruments and some chemicals. (Watson 1994, Gorrel 1998)

Calcium salts in the saliva deposit on the plaque and produces calculus (tartar). As calculus has a rough surface, it allows more plaque to form. (Watson 1994, Gorrel 1998, Bjone et al 2005)

Effects of periodontal disease on health

Periodontal disease may result in tooth loss and as the mouth is the primary input to the digestive system tooth loss can affect the animal’s overall health. Tooth loss can occur from plaque formation. Micro-organisms in plaque produce enzymes which digest the host proteins and produce additional nutrients for plaque growth. These enzymes include proteases that are capable of digesting collagen, elastin and other components of the epithelial and connective tissues. When gums become inflamed, they recede resulting in loss of alveolar bone and potentially loss of teeth. (Watson 1994, Gorrel 1998, Kyllar & Witter 2005)

Plaque may also be responsible for infection in the mouth. Micro-organisms in plaque may initiate cell-mediated and antibody mediated immune reactions. (Gorrel 1998, Kyllar & Witter 2005) When there is infection in the mouth, it can spread from one area of the body to another through several mechanisms. Firstly, infection can spread through direct contact. It can also spread from the trachea to the lungs, oesophagus to the stomach, and Eustachian tubes to the ear. Finally, the infection can spread through the lymphatic and circulatory systems. (Fagan 1980, de Bowes et al 1996, Gorrel 1998)

Role of diet in periodontal disease

Diet may play a number of roles in periodontal health. Nutritional imbalances may affect an animal’s immune function leaving it more susceptible to disease. (Gorrel 1998)

Food debris around the teeth, once thought to contribute to oral health, has been discounted as a possible factor in periodontal disease. A study of dogs fed by tube showed these dogs still developed plaque while dogs fed an identical diet and subjected to teeth cleaning developed no gingivitis. (Gorrel 1998)

The consensus from a number of studies is that the texture of the diet affects the composition and rate of plaque formation. Soft diets produce more bacterial plaque and facilitates the development of periodontal disease because it is not abrasive enough to remove plaque. Conversely, however, excessively course, granular diets can injure the supporting tissues through overuse. (Fagan 1980, Watson 1994, Kyllar & Witter 2005)

The ideal foods to prevent periodontal disease are firm in consistency and texture. Eating these types of diets can reduce established calculus accumulation through abrasion. Such diets also require chewing which increases the number and distribution of capillaries in the gingival (gum) tissues thereby improving the health of these tissues. Chewing compresses and expands the periodontal ligament space around teeth which increases circulation and fibroblastic activity to promote a dense supportive tissue structure. (Fagan 1980, Watson 1994, Gorrel 1998)

Chewing also helps maintain the proper bone resorption and formation of the alveolar bone. Fagan observed that in animals that do not chew sufficiently, atrophic changes and lower bone activity in the alveolar bone. Fagan notes that captive carnivores need to chew their food “aggressively and ferociously” so they do not lose the primary entry point of the digestive system. (Fagan 1980)

For dogs that eat a predominantly soft diet, a few small changes can be made to add methods for removing plaque including some of the following.

In a study of the oral health of captive Amur tigers, Haberstoh et al concluded that twice weekly bone feeding improved gingival health, disturbed plaque formation, periodontal pockets observed at the beginning of the study were reduced in depth or total resolved so less food was caught and there was less substrate for oral bacterial growth. (Haberstoh et al 1984)

Fagan supports Haberstoh et al’s findings when he makes the following statement about captive carnivores “the best kept secret of the last fifty years is that we must eliminate the pre-processed, the over-cooked, the smashed, the blended and the pureed foods and feed our animals a more appropriate diet duplicating the feeding habits of feral conditions.” (Fagan 1980)

Dr Ian Billinghurst concurs with the findings in captive carnivores when he makes the following statement about domestic dogs “Dogs fed cooked and processed food and no bones will always develop a weakened immune system and poor dental health.” (Billinghurst 1993)

Replacing part of diet with large biscuits of a size, shape or texture to encourage chewing. (Watson 1994)

For more information about formulating a nutritional balanced diet to prevent periodontal disease and promote your dog’s good health, please contact me

Billinghurst, I 1993, Give your dog a bone:the practical common sense way to feed dogs for a long and healthy life, Warrigal Publishing, Bathurst NSW.