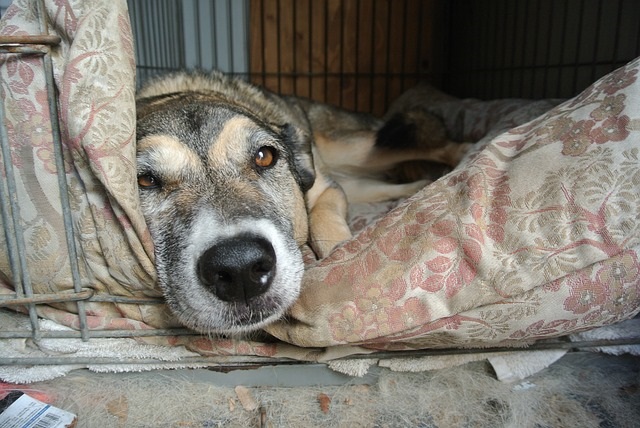 How to prevent muscle atrophy in dogs needing crate rest?

Crate rest is often recommended for dogs after surgery or when they are recovering from an injury. While crate rest assists in recovery, long term crate rest can lead to muscle atrophy (or wasting) and loss of muscle strength.

In addition to muscle atrophy, in some cases of disuse muscle atrophy, localised inflammation can also be observed. Inflammation may be due to increased expression of pro-inflammatory substances (cytokines and chemokines) in the affected tissues along with an accumulation of interstitial (intracellular) fluid. The accumulation of fluid is likely due to reduced interstitial fluid flow resulting in localised swelling (edema).

How to treat muscle wasting when crate rest is recommended?

Physical exercise is known to have anti-inflammatory effects on tissues however may be contraindicated in some rehabilitation cases. Massage is also known to alleviate inflammation and pain, so it may be considered an appropriate treatment when physical activity is not possible.

In a study of mice, the mechanical forces of massage-like compression loading were used to emulate moderate muscle contractions that are performed during physical activity. The study sought to investigate the effect of these forces on local inflammatory processes associated with disuse muscle atrophy. Specifically, the study explored macrophage function and behaviour in skeletal muscles. (When tissues are damaged, macrophages are recruited to the damaged tissue to remove cellular debris from initial tissue injury and then assist in the repair and restoration of the tissue.)

The study immobilised the hind limbs of a group of mice. After seven days of immobilisation, both limbs were unbound and one limb was “massaged” using a compressive loading device for 30 minutes per day for 14 days.

Effect of immobilisation on muscle wasting

In terms of inflammation, post immobilisation and before massage, there was evidence of increased in inflammatory regulating substances, namely MCP-1 (Monocyte chemoattractant protein-1 which plays role in recruiting monocytes / macrophages) and tumour necrosis factor alpha in the gastrocnemius muscle. Additionally, there was an increase in macrophage cells too.

The study therefore concluded that immobilisation results in muscle atrophy and inflammation.

After massage, the accumulation of inflammatory substances including macrophages were reduced. These findings are consistent with those of an earlier study of rats. In this study, after daily massage, the infiltration of leukocytes and monocytes was diminished and the massaged limbs demonstrated enhanced recovery of contractile force.

While physical activity may be contraindicated for dogs recovering from surgery or injury, massage may be considered a viable treatment option to prevent muscle atrophy from immobilisation. The mechanical forces of massage can emulate the intramuscular pressure of moderate muscle contractions experienced during exercise. Such pressure has been shown to modulate macrophage recruitment and in so doing alleviate inflammation.

Finally, this study has shown that 30 minutes of daily massage can reverse muscle atrophy induced by immobilisation. This study indicates that where an objective of a rehabilitation programme is to address muscle atrophy from disuse, massage may be considered a viable treatment option.

Full Stride provides remedial massage treatments for dogs to aid in recovery from soft tissue injury and maintain healthy muscle function so they stay active and pain free. Full Stride operates in the Brisbane area. To find a certified practitioner near you, please see www.saena.com.au

Until next time, enjoy your dogs