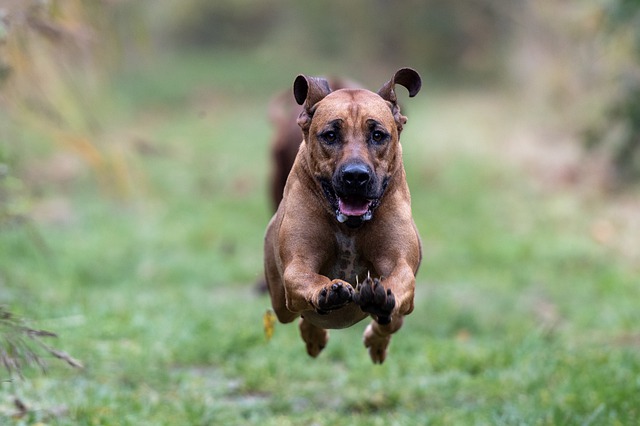 Unlike humans, quadrupeds’ forelimbs play a role in locomotion. A dog’s front legs and neck are used to create and moderate movement along with other important functions. When these muscles are injured or strained, then the dog’s gait and ability to perform regular activities such as grooming may be impaired.

Due to a dogs’ forelimb skeletal structure, much of the musculature that fixes the dog’s forelimb to their trunk and enables forelimb movement independent of the trunk, attaches to the cervical vertebrae and surrounding bones.

Where are the cervical muscles located on the dog?

The dog’s cervical spine starts at the rear of the dog’s head and curves down to their shoulders. It comprises seven (7) cervical vertebrae starting with the atlas (C1) and axis (C2) which form the “head” joint. The atlantooccipital (juncture of atlas and dog’s skull) and atlantoaxial (joint formed by the atlas and axis bones) joints allow the dog to move their head up and down, side to side and to rotate it. These joints also enable the dog to move their head independently of the rest of cervical spine and shoulders.

What is the role of canine cervical spine muscles?

Muscles of the cervical spine are complex. They have multiple attachments to the vertebrae and other bones including the scapula, skull and rib cage. The fascicles (bundle of muscle fibres) of these muscles have varied length indicating different rates of conduction through the fascicle and therefore different rates of muscle excitation. Many of the muscles of the cervical region are broad at their origin and contain multiple tendinous divisions, so muscle portions can be activated successive as the dog moves through a stride cycle.

Additionally, there can be variability in this group of muscles between dogs in the following areas:

This variability may influence differences in movement capabilities between individual dogs.

Muscles that attach to the cervical spine are necessarily complex due to the number of roles they play while the dog is stationary and at different gaits (i.e. walk, trot and gallop). Some of the roles of these muscles are discussed below.

Stabilise head, neck and thoracic segment of the spine

The dog’s centre of mass (COM) is in front of the vertebral column, behind the sternum, level with the 9th intercostal spine. In a study of German Shepherd Dogs, when the dog is standing stationary, 31% of the dog’s body weight was borne by each forelimb.

As such, active muscle contraction is required to support the dog’s head and neck and stabilise the thoracic segment of the spine.

Muscles in the cervical region produce head movement. A dog’s head position and neck movement is important for the dog’s visual and auditory orientation, feeding, grooming, predation and defence.

In a trot, the dog adjusts their head position to support movement. During the trotting gait, the dog thrusts their head forward to shift their centre of mass forward thereby lending thrust force to the fore limbs.

The forelimb of the dog, unlike their hind limb and the neck / shoulder anatomy of humans, has no skeletal connection between the limb and the thorax. A muscle “sling” attaches dog’s forelimb, cervical vertebrae and thorax (ribs). When the dog moves all forces are transmitted through this musculature. These muscles apply braking forces and absorb the energy from the dog’s foot contacting with the ground.

The main roles of the muscles of the cervical region during a walk, trot and gallop are to protract and retract the forelimb and stabilise the shoulder joint and trunk. Some of the cervical muscles with a role in locomotion are discussed below.

Some of the muscles responsible for forelimb protraction (moving the limb forward) include the cleidobrachialis, pectoralis superficialis, omotransverse.
The cliedobrachialis originates in the clavicular tendon band on the dog’s chest and inserts into the humerus (upper arm).

The pectoralis superficialis originates in the sternum and inserts into the humerus. It enables rotation of the forelimb for cornering and absorbing ground forces.

A couple of muscles responsible for retracting the forelimb include the latissimus dorsi and pectoralis profundus.

The pectoralis profundus or the deep pectoral originate in the sternum and inserts into the humerus.

The limb retractor muscles are active during the second half of the swing phase to bring the forelimb under the trunk in preparation for the stance phase.

The role of the serratus ventralis and rhomboid in all gaits is to brace the forelimb against impact forces and to draw the scapula to the trunk as the limb moves.

Another muscle responsible for stabilising the limb and trunk is the trapezius. The trapezius has a cervical and thoracic portion. The cervical trapezius originates in the cervical vertebrae while the thoracic portion originates in the thoracic vertebrae. Both portions of the muscle insert into the spine of the scapula. They are separated by a tendinous band extending from the spine of the scapula to the median raphe of the neck.

The cervical portion (closest to the dog’s head) of the trapezius is active in two bursts in all gaits. Firstly, there is muscle activation on lift off and touchdown of the ipsilateral limb and secondly, in the middle of the swing phase. The role of this muscle is to stabilise the fulcrum during limb reversal in all gaits, counteract retraction of the limb at the end of the stance phase and protract the limb at the start of the swing phase.

Unlike the cervical portion of the trapezius, the thoracic portion has different muscle activity patterns across gaits. At a walking gait, the muscle is active from the second half of the swing phase. During the trotting gait, the largest burst of activity is at the end of the stance phase into the swing phase.

Finally, at a gallop there are two bursts of activity in the leading limb. The first burst is mid-stance and the second burst in the second half of the swing phase.

In the trailing limb at a gallop, the muscle is active throughout the swing phase. This muscle’s activity is influenced by the contralateral limb position and motion as follows:

In the leading forelimb (at a gallop) the thoracic portion of the trapezius is active during the first half of stance phase. The muscle’s role is to stabilise the fulcrum and prevent abduction of the scapula. During the swing phase, contralateral forelimb has just touched down therefore activity is required to support the scapula in a vertical direction and prevent the ipsilateral forelimb from prematurely touching down.

What are the signs of injury to muscles of the dog’s cervical spine?

Based on the function of these cervical muscles while the dog is stationary and moving, here are some signs that these muscles may be injured.

The musculature of the dog’s cervical region is complex and these muscles play important roles in the dog’s grooming, eating, expression and locomotion.

Image by janwiersma from Pixabay