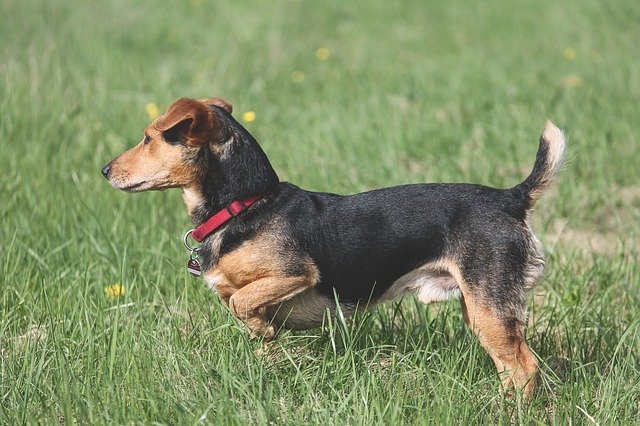 Recently, a canine patient, that had undergone surgery for hip dysplasia approximately 5 months earlier, presented with a limp in the ipsilateral forelimb to the repaired hip. The limp was seen clearly at a walking gait. At a walk, the dog’s stance time was increased and the head was inclined slightly toward the affected forelimb.

Vet diagnosis concluded the change in gait was likely due to a soft tissue issue. On palpation, the dog exhibited significant tone in the lateral and medial shoulder musculature and cervical muscles. At a stand, the dog was not weight bearing fully on the non-repaired hind limb.

The dog was exercising normally and had not had incurred any known injury that would account for the gait change.

This case prompted several questions – How does a dog’s gait change post-surgery for hip dysplasia? What effects does a change in gait post-surgery have on the dog’s entire musculoskeletal system? For how long do these effects last?

A study of five mixed breed dogs sought to quantify the forces and moments in the canine hip joint after total hip replacement surgery. The study performed a unilateral hip replacement on the dogs and then measured hindlimb forces one month and four months after the surgery. Vertical ground forces were measured by lead walking the dogs over a force plate. The joint centres of rotation measured were:

Pre-operative vs one month post-surgery results

At one month post-surgery, significant increases in vertical forces exerted by the normal hip were observed. These results suggest that in the initial stages of healing, the dog shifts their weight to the unaffected hip.

The greatest magnitude of cranio-caudal (forward and backward) forces occurs when the dog brakes (i.e. paw touches down). Propulsive cranio-caudal forces are applied when the dog pushes off. One month post-surgery, the implanted hip showed significantly lower braking (-30.4%) and propulsive forces (-33.1%) compared with pre-surgery magnitudes.

Consistent with the reduction in propulsive force in the implanted hip, hip extension was significantly reduced one month post-surgery (-66.2%). The control hip flexion moments increased (+30.1%) but the peak extension in the control hip decreased.

By four months post-surgery, peak vertical forces in the implanted hip are significantly increased (+293.1%) and the control hip are decreased (-38.7%). These results indicate more balanced ground forces between the two hips which suggests a restoration of function.

Braking and propulsive forces in both hips at four months post-surgery indicated a decrease compared with pre-surgery values. This decrease was particularly evident in the braking forces exerted by the control hip. There was a decrease of 28.7%.

The bilateral reduction of hip forces at four months post-surgery combined with the absence of an antalgic gait, suggests the dog may compensate for the hip replacement by shifting their weight from the hind limbs to the forelimbs. This suggestion may offer an explanation for my patient developing a limp in the forelimb several months after surgery.

When the animal shifts their centre of mass to compensate for loss of function in the hind quarters, then evidence of muscle damage due to overloading can be observed. Muscle damage induces muscle tenderness and potential inflammation which affects the dog in a number of ways.

Combined, the impact of muscle damage due to overloading, can increase the animal’s risk of injury. Loss of muscle power, changes in recruitment patterns along with changes in joint kinematics alters the animal’s shock absorbing ability when moving at high speeds or jumping. Additionally, loss of co-ordination increases the risk of slips and falls while a reduction in power may overload tissues unaccustomed to the forces required of them.

The changes in gait that occur post-surgery for hip dysplasia can potentially affect the dog’s entire musculoskeletal system for several months. Remedial massage, range of motion exercises and stretching can be effective in relieving muscle soreness and supporting the healing process.

Image by Manfred Richter from Pixabay