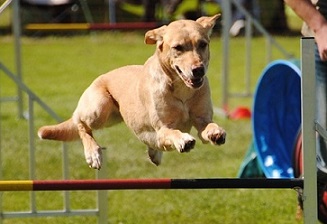 While I don’t personally use dog parks, I have noticed that most of the parks in my area are now equipped with “agility” like equipment including A-frames, jumps, weave poles, and tunnels. Pet dogs can have a bit of fun weaving, jumping and negotiating the obstacles, but what effect does this type of exercise have on their muscles and does it expose them to risk of a soft tissue injury?

In highly trained dogs who participate in competitive agility, soft tissue injuries like strains, sprains and contusions are common. Frequently, these injuries occur in the shoulder and forelimbs.

A 2017 study of canine agility athletes sought to understand the relationship between muscle activation and risk of injury, specifically in the forelimbs. The study measured the muscle activation in four forelimb muscles while dogs performed two common agility tasks: A-frame and jumps.

The activations of the Supraspinatus were highest when leaving the A-frame and jumping but lowest while preparing for take-off into a jump and landing a jump.

The study also analysed muscle activations through the stance and swing phase of the dog’s gait as they performed the three tasks (walking, jumping and A-frame). This analysis was significant because eccentric contractions, where the muscle releases slowly to allow better muscle control, are known to contribute to injury and fatigue (See blog on Delayed Onset Muscle Soreness ) and occurs through the various phases of the gait.

The study observed that the longest stance time across the activities occurred when the dogs were descending the A-frame. Peak activations of the Biceps Brachii, Supraspinatus and Infraspinatus occurred during the stance of these strides. This finding supports the understanding that forelimbs exert stronger braking forces downhill to facilitate front to back body balance.

Peak activations of the Biceps Brachii and Brachial Tricep occurred during the swing phase of the jumping transition stride to flex the shoulder and elbow joints. During this phase of the gait, these muscles are performing concentric contractions (muscles shorten or lengthen to create joint movement) to extend the shoulder and flex the elbow to clear the jump. In preparation for landing, these joint motions are reversed. Accordingly, the Brachial Triceps and Biceps Brachii are active during both stretch and shortening contraction cycles of the muscle. The study concluded that the most demanding part of the jump across all four forelimb muscles was the transition stride where the dog lifts off the ground to clear the jump and reaches forward with the forelimb to land.

Key points for all dog owners

The risk of muscle injury increases when muscles are overused or overloaded. Activities like jumping, ascending and descending sharp inclines activate the muscles in the shoulder up to 10 times more than walking on flat surfaces.

The action of jumping, ascending or descending is not isolated to agility equipment. It is reflected in everyday actions our dogs perform including jumping onto furniture, into the car, and negotiating stairs.

Ways to prevent muscle strain in dogs include:

If your dog has experienced a soft tissue injury, please contact me to discuss how a myofunctional treatment may benefit your dog. Full Stride provides canine myofunctional therapy including massage and exercise therapy in Brisbane’s north. We offer in home consultations or treatments in my clinic.