How to slow the effects of aging on dog’s muscles? 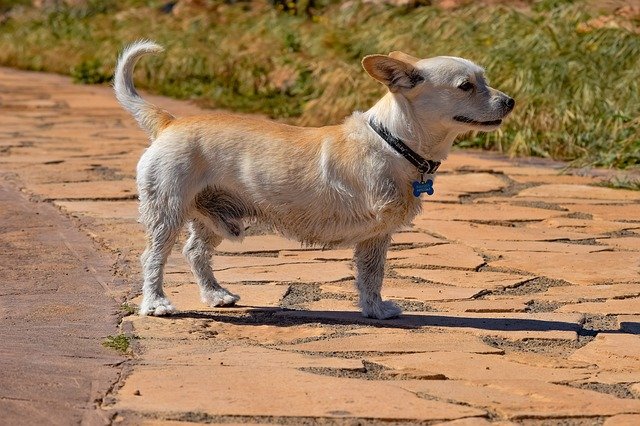 When I am asked to treat a dog with any dysfunction in a limb, I usually start my treatment in the limb diagonally opposite the dysfunctional limb. For example, if the dog has an injury, arthritis or hip dysplasia in the right hindlimb, then I will typically start the treatment in the left forelimb. Often clients find it odd that I don’t immediately start treating the limb for which they sought treatment for their dog.

There are three reasons I approach a treatment in this way.

For most of my canine clients, the first time I treat them is also the first time they have met me so I like to give them time to feel comfortable being around me. During the initial consultation, I spend 10 – 20 minutes talking with their Mum or Dad to get a health and lifestyle history which allows the dog to acclimate to me. After I have taken a history of the dog, I usually ask the dog to do a few “exercises” so I can assess their movement. If the dog is comfortable for me to palpate them, I will also do so as part of my treatment planning.

When I start the treatment, many dogs are a little unsure, as they may not have been touched “intentionally” before. This sensation can be a little unnerving for some dogs. For this reason, I help the dog feel comfortable with my touch in an area that is not painful or uncomfortable. I want the dog to associate my touch with positive and calming sensations so they can trust me when I move to the dysfunctional limb.

During the opening sequence of a treatment, I also want the dog to learn they are in control of the treatment. They are free to move away from my touch, if they need a break. If a dog “asks” for a break, that is fine. I won’t restrain them or force them to be treated if they are not ready. For me, it is so important that the dog understands this “contract” so I can help them and everyone feels comfortable and safe.

During an initial treatment, I may not actually touch the limb for which the human client has sought treatment for their dog. The dog may not be comfortable allowing me to touch that limb and that is OK. By treating the unaffected limbs, I am still providing the dog relief. When a limb is not functioning normally, the dog shifts their weight from this limb and re-distributes it to their other limbs. Weight shifting affects the dog’s gait, so other muscles are activated at greater intensity and for longer periods of time, thus overloading these muscles resulting in muscle strain. Any muscle injury, however slight, can be inflamed and painful.

A canine study, in which dogs with an induced hind limb injury (right hindlimb tied up to the body with a sling) walked on a treadmill, found the muscle activity in the functioning limbs was altered significantly.

With tripedal trotting, the muscle activity of the vastus lateralis (deep thigh muscle) on the contralateral limb was significantly increased and the muscle remained active for longer period through the gait. The reasons for this are:

(1) The contralateral limb supports a greater proportion of body weight during locomotion.

(2) The increase in muscle excitation in the second half of the support phase is required so the stifle joint can produce the required propulsive forces through a greater rate of stifle extension.

(3) Stifle extension starts later in the gait as the foot passes the vertical of the hip later in the hind limb excursion.

Both forelimbs bear greater body weight with tripedal vs quadrupedal trotting. In tripedal trotting, the body is supported solely by the forelimbs so forces usually exerted by the forelimbs to oppose nose-up tilting and rolling of the body are lacking. Vertical forces are greater on the contralateral forelimb than ipsilateral. These forces are reflected in greater muscle excitation in the contralateral vs ipsilateral forelimb.

The longissimus dorsi muscle also has a mobilising function during locomotion. During quadrupedal locomotion, it facilitates lateral bending and torsion to mobilise the spine. In tripedal dogs, when pushing off, they require greater lateral flexion toward the contralateral limb which increases the activity of the longissimus dorsi unilaterally.

Another canine study of dogs with hindlimb lameness identified similar gait adaptations causing increases in activity in compensatory muscles. It found that the limb with the most changes in muscle activity is the contralateral pelvic limb. Dogs engage the opposite limb when dealing with functional loss which in turn effects the diagonal limb of the unaffected pair. As such, with tripedal trotting, muscle activity increases are observed most in the contralateral pelvic limb, followed by contralateral thoracic and ipsilateral forelimb. When trotting on three legs, the dog’s centre of body mass shifts cranially to unload the remaining pelvic limb. This weight shift, most significantly, involves the limb diagonal to the affected limb and allows one limb’s functional loss to be compensated by the other.

The asymmetric loading patterns identified in these studies are the basis upon which I plan an initial treatment for dogs with lameness. Relieving compensatory muscle strain provides great benefits to dogs, even if the source of the lameness is not initially addressed.

Benefit injured leg without touching it (Cross over effect)

While I may not physically touch the injured limb, during an initial treatment, massage can still be effective.

An animal study using rats as subjects concluded that massage can be an effective intervention for building and maintaining muscle mass where individuals are not able to engage in resistance exercise. Massage was shown to decrease muscle atrophy and increase muscle tone even in the untreated limb.

In this study, the subjects were divided into four groups as follows:

After 14 days of hind limb suspension, muscle atrophy from immobilisation was evident. There was a decrease in muscle tone of 38%.

After the treatment protocol, the muscle fibres in the group receiving massage were significantly larger compared with the reambulation group.

Importantly, in the contralateral, non-massaged limb, the muscle fibre cross sectional area was significantly greater in the massaged group compared with the reambulation group. In the non-massaged limb, the study found that protein synthesis was also elevated which indicates muscle remodelling occurring without direct mechanical manipulation.

Similar findings have been reported in human studies, where subjects reported significant reduction in the perception of muscle soreness after massage in one leg only after induced muscle soreness compared with a control group.

These studies indicate that despite a limb not being treated directly, massage can positively impact muscle remodelling, perception of muscle soreness, and inflammation.

These are three reasons I typically approach a massage treatment for a dog with lameness by addressing the unaffected limb pair first.

Image by Dimitris Vetsikas from Pixabay