My dog dips their head when they walk 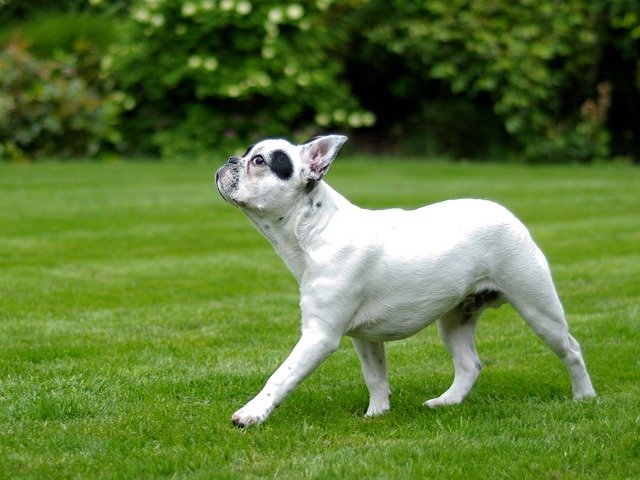 My dog dips their head when they walk

When healthy, sound dogs walk or trot their heads move up and down slightly through the stride cycle. If you notice your dogs’ head bobbing up and down significantly, this is a good indication of a disturbance in their movement.

In dogs, the walking and trotting gaits are symmetrical gaits which means that the movements of limbs on one side of the body do the same as those on the opposite side albeit not at the same time. Any recurring differences in the dog’s movement from one side to the other may be an indication of the following:


All of which indicate some form of lameness.

Types of lameness in dogs

Lameness can be classified as one of the following:

1. Supporting leg lameness or weight bearing lameness. With this type of lameness, the dog adjusts their centre of mass during the stance phase.

2. Swinging leg lameness. This type of lameness is observed as a disturbance in the normal motion of the limb during the swing phase. The swing phase is the period when the foot is in the air.

An example of swinging leg lameness is in the case of infraspinatus injury or contractures. (The infraspinatus is a deep muscle of the shoulder which plays a role in joint flexion and extension and humerus rotation.) When the infraspinatus muscle is injured, the dog’s foot can be observed swinging laterally during limb protraction.

Another example of swinging leg lameness is in the case of an injury to the gracilis (medial hindlimb muscle responsible for limb adduction and extension of the tarsus.) With this injury, hyperflexion and outward rotation of the tarsus (hock) can be observed as the dog moves.

While muscular injuries are a significant cause of swinging leg lameness there are other conditions in which gait abnormalities may be observed. These conditions include joint disorders or conditions that cause elbow, hip, stifle, neck or back pain resulting in abnormal joint flexion – extension, abduction – adduction, limb protraction, or retraction and rotation.

A study of dogs with induced lameness sought to quantify vertical motion symmetry of the head, pelvis and hip during the swing phase as a way to develop a broader understanding of compensatory movement.

The study involved 10 dogs upon which reflective markers were attached to the:

Measurements of the positions of the anatomical structures to which the markers were attached were collected before and after induced lameness.

This study found dogs with induced swinging forelimb lameness held their head higher during the swing phase: (-28.5mm and 20.1mm) for left and right forelimb lameness respectively, compared with 1.3mm before induction of lameness.

Similarly, pelvic was higher during induced swinging limb lameness in the hindlimb: (-10.9mm and -3mm) left and right hindlimb lameness respectively, compared with 2.7mm before induction of lameness.

Changes in vertical position of the dog’s head, pelvis and hip

Inducing swinging limb lameness in dogs has shown asymmetric motion of the head, pelvis and hip vs the sound limb. There is a lower head and pelvic position after the lame limb pushes off and during the swing phase. Increased hip movement asymmetry was also observed. There is increased vertical motion of the hip on the lame side during swing phase.

While the findings of this study provide clear indications of changes in head, pelvis and hip position, it does not address the effect on head and pelvis movement under the following conditions:

How does lameness during the swing phase effect dog’s muscles?

This study shows significant compensatory motion when lameness is induced in either the forelimb or hindlimb.

With forelimb lameness, the range of up and down movement of the dog’s head is significant during each stride. This additional movement overloads the muscles that produce head and neck movement. For more information about cervical muscles please see: https://www.fullstride.com.au/blog/what-is-the-role-of-cervical-muscles-in-dogs-movement-and-how-to-tell-if-they-are-injured

Further, muscles on the sound limb will be overloaded due to weight shifting through the dog’s stride. Muscles groups affected include those in the dog’s chest where many of the cervical muscles that create head movement attach. Muscles of the shoulder girdle that create forelimb movement are also affected.

Similarly, with hindlimb lameness muscles that produce hip movement will be overloaded with increased hip and pelvis motion due to swinging limb lameness. Muscles affected include the gluteals, semitendinous, and biceps.

Muscles that are overworked quickly become fatigued. Fatigued muscles can further affect the dog’s gait (e.g. shortened stride, limited joint flexion and extension, reduced power), resulting in the lameness becoming more pronounced. Overloaded muscles feel hard to touch and the dog’s fascia may be “tight” around these muscles. Trigger points with spasms may also develop over time which can be painful for the dog.

How can massage relieve muscle tension from lameness?

Massage can be effective in addressing muscle tension caused by increased motion of the head and pelvis due to lameness in the following ways:

Image by christels from Pixabay